A platform for a European City Makers movement 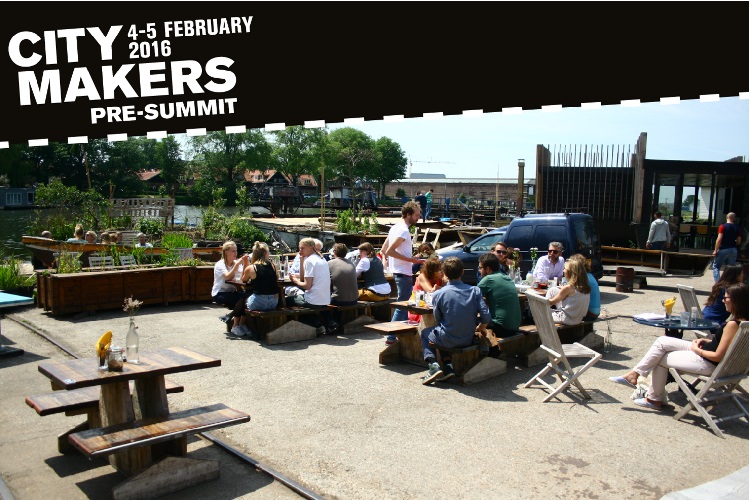 In our cities, the question ‘Who makes the city?’ persists. Over the past couple of years, Pakhuis de Zwijger has fueled the City Makers movement that aims to create a more liveable, beautiful, sustainable and inclusive Amsterdam. Together with these urban innovators, Pakhuis de Zwijger has worked tirelessly to carve out more space for new initiatives that shape cities according to the needs of their users and stakeholders. According to Joachim Meerkerk and Charlot Schans of Pakhuis de Zwijger, Europe cities can benefit from a solid network for local social regeneration. Moreover, an interlocal network could help establishing a paradigm shift in ideas about how cities are made.

“Experimenting. Constantly reinventing and making new connections.” That’s the new spirit of Amsterdam which, according to Meerkerk, increasingly began to manifest itself around five years ago. ”There was a buzz around people starting urban agriculture projects in the city, building their own homes, strengthening social ties and the local economy by introducing their own local currencies, and more of that kind. A diverse range of initiatives set up by stakeholders from various backgrounds sprang up.” During the Amsterdam Transition Town festival at Pakhuis de Zwijger in 2012, different kinds of new local projects came together. Meerkerk noticed that these initiatives had similar core objectives: “They were pioneering, thought in networks, and the importance of ownership and control. They demonstrated the desire to shape their own lives in a different way, and change the city in the process.” According to Meerkerk, this was a promising emerging movement that needed space to grow and flourish. After that, Pakhuis de Zwijger became the beating heart of this movement in Amsterdam. 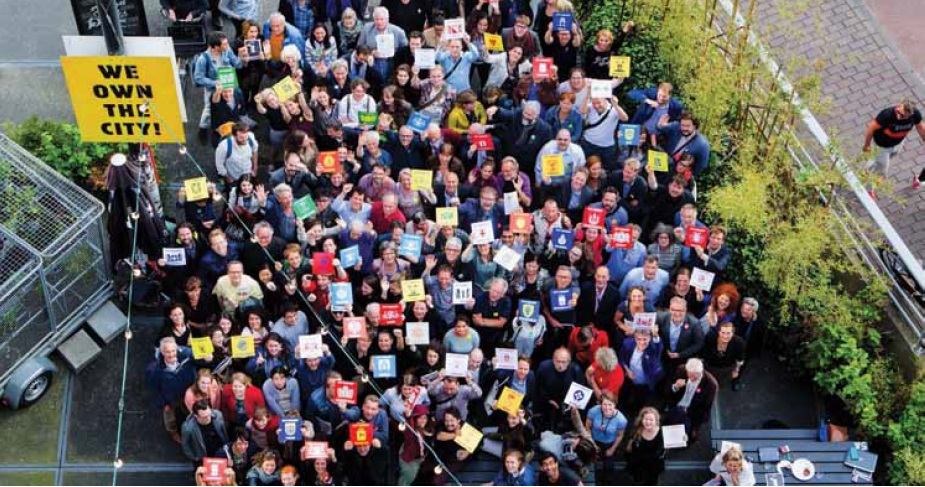 In this former warehouse, new approaches to urban development have been gathered and developed since then. “The idea is that we make the city together”, says Schans. “We facilitate a platform for people who dare to take a new path. Whether it be people who build their own communities or civil servants who stick out their necks and try to realise a new sustainable neighbourhood.” In the Netherlands, starting an energy cooperative or influencing a neighbourhood budget was something only a small group of innovators could think of a few years ago. “The initial goal”, adds Meerkerk, “was to showcase all the innovation taking place in the city. To create a platform that the pioneers, City Makers, can use to improve their ideas and projects, to talk about their initiatives and to inspire others.”

It is clear that there is a great need for new solutions and new forms of cooperation in the city. In order to shape a new city in which there is room for social innovation, the involvement of all inhabitants is required. Pakhuis de Zwijger is an open platform that welcomes more than 65,000 people every year who want to know more about social innovation and also contribute to this new city: citizens, entrepreneurs, civil society organisations, civil servants, politicians, and so on. “We see that we are entering a new phase now”, says Meerkerk. “When we started, there was a group of innovators and early adopters that attended our programmes to get to know and inspire each other. Jointly they started the quest on discovering and inventing new ways of city making. These innovators expect more specialised, niche-orientated meetings now. But at the same time, there is a growing group of newcomers (the early majority) that want to know about the innovation that has been developed over the last couple of years. And they want to get connected to the existing movement. We are going to further diversify our programme and will work on further online support and documentation, in order to serve a diverse learning community.”

An example of this next step is the New Democracy series. This series focuses on researching fundamental questions such as our system of governance and the role of citizens in their city related to the ideal of democracy. ”In Pakhuis de Zwijger, we organise altogether more than five hundred programmes annually. In many of those meetings, such underlying political issues come forward, but are not always explicitly addressed”, says Meerkerk. The programmes have a ripple effect, sparking a conversation about more fundamental change in the city. “With New Democracy, we pick up these questions and search for answers that address a fundamental systems redesign. It is a way to identify what the fundamental problems are and thus influence the way we organise decision-making in the city. That can help the practice of building a new city together.”

We facilitate a platform for people who dare to take a new path. Whether it be people who build their own communities or civil servants who stick out their necks and try to realise a new sustainable neighbourhood.

In the coming period, Pakhuis de Zwijger will focus more often on delving deeper into specific issues, without forgetting the large group that wants to be inspired by City Makers’ ideas and projects. “We see that people are at different stages and we want to continue to engage with all those groups. This calls for more diversity in our programming”, says Meerkerk. Meanwhile, Pakhuis de Zwijger also has engaged an international audience. “Over the past two years, we have been developing a network of local City Embassies, through increasingly making connections to existing platforms and City Makers in Europe. During our ‘Metropolitan Field Trips’ to other European cities we explore the social innovation in those cities. What kind of bottom-up initiatives take place in Dublin or Sofia? What can we learn from Bucharest or London? It is remarkable that a solid network of City Makers was missing on the level of European institutions,” says Schans, “we are creating and expanding upon that network now.” The platform ‘New Europe – Cities in Transition’ is grounded in that network. Schans has noticed the emergence of local initiatives during her visits to other European cities. “In Italy, Hungary and Spain, people are also busy shaping their cities in new ways. People there are just as concerned with urban agriculture as we are, are trying to strengthen local democracy, or think of solutions to fight poverty. But it is often the way these projects are carried out and how they interact with the institutional sphere that slightly differs per socio-economic context. Therefore, it is opportune and important that we learn from each other. By bringing these projects and their initiators together, we can share experiences and learn from each other”, she says.

Towards a European network

It is important that local initiatives that already exist in European cities are made visible and gain acknowledgement for the crucial role they play. There are many City Makers actively reshaping their local social environment, but their work remains unnoticed or even contested by government institutions or society at large. Forming a network and creating a movement helps to create a more widespread recognition. In some countries, this visibility is also important to gain a foothold according to Schans. ”It is not always normal for citizens and administrators to work together to improve the city. And for residents, control over their own environment is not always obvious. A great lack of trust between residents and authority can exist. In those places, engaging with like-minded people in other cities can give new ideas and inspiration to continue. Additionally, successful examples from abroad can help local administrators make a shift in the way they support City Makers’ projects and cooperate with local citizens. In the Netherlands, we can also learn a lot from new initiatives and governance models in other countries. Just think of what has been experimented with in the Big Society programme in England, and has inspired others to rethink the way they are making the city. Throughout Europe, we can benefit from these experiences, and build upon the do’s and don’ts.”

‘New Europe – Cities in Transition’ plays an important role in inspiring European City Makers in the exchange of knowledge and cooperation. “We will continually work on the City Makers Agenda, highlighting the importance of local, custom-made and integrated urban solutions that should receive more attention. That’s a blind spot. Europe spends a lot of money on research and pilot projects, but facilitating a network that builds upon existing initiatives and City Makers that are genuinely engaged in reshaping their cities, does not seem to fit the institutional agenda yet. It is high time that we change this!”

This article first appeared in New Amsterdam #9, an in-depth extension of the online platforms stedenintransitie.nl and citiesintransition. eu, where City Makers gather and connect. They are the heart of the stories about new initiatives, testing grounds, city labs and creative breeding grounds in cities all over the world and in the programmes of Pakhuis de Zwijger. For more information, see: www.dezwijger.nl, www.stedenintransitie.nl and www.citiesintransition.eu.

Joost Zonneveld is an independent journalist.